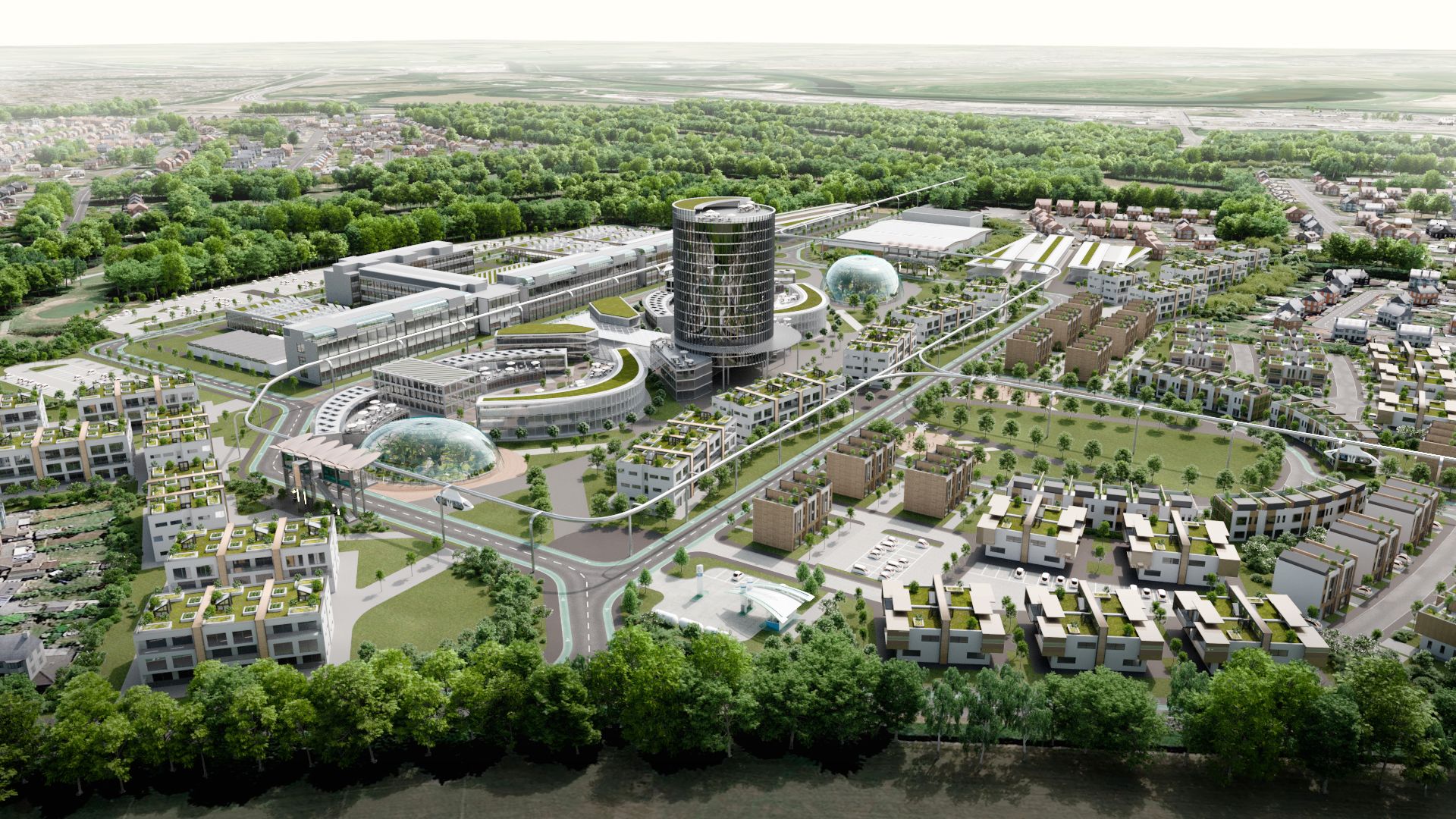 Artist’s impression of what Heath Park could look like, including a monorail and vertical farm. (Photo: SOG)

Runcorn’s eco-accreditations received a global platform when the Heath Park redevelopment project was presented at the Global Investment Summit (GIS) in London.

The plan to transform Heath Business and Technical Park into a zero-carbon district called “Heath Park” was one of 35 green innovation programs chosen to promote the UK company’s “showcase” on Tuesday 19 October.

According to the proposals, the former ICI complex would become a place where “people can live, work and play” in an environment created to meet the challenges of climate change, including being powered by renewable energy and hosting companies, including a state-of-the-art vertical farm.

The program is classified as a ‘flagship project’ of the City of Liverpool region.

Hosted by the Queen, other members of the Royal Family and the Prime Minister, GIS’s aim was to promote the UK’s potential to shape the future of green investments and preceded the UN COP26 conference of November.

Heath Park was also the only project in the City of Liverpool region and one of only two in North West and North Wales featured in the Global Investment Atlas launched by the UK government at GIS.

A spokesperson for SOG, owner of the Runcorn site, said the atlas is a “showcase” for government-accredited environmental innovation projects to stimulate foreign investment.

Steve Rotheram, Mayor of the Liverpool City Metropolitan Area and present at GIS, said: “To face the threat of climate change, our planet needs a green industrial revolution, and the Liverpool City region has the potential to be one of its world leaders.

“Projects like Heath Park are a fantastic example of the overlap between green innovation and environmental regeneration that I champion in our region. “

John Lewis MBE, Owner of SOG Group, said: “Our vision is the culmination of over two years of methodical research and effort that has been validated at every step by a team of experts, including academics from foreground of the universities of Liverpool and Lancaster Heath. Park was born out of SOG’s sponsorship of a global competition organized by the RIBA, the Royal Institute of British Architects, which attracted more than 50 entries from architects, avant-garde and designers from around the world.

“It has generated incredible insights into the vision for future life with a series of fascinating proposals on future trends in employment, housing, recreation, community, energy consumption and sustainable food supply. .

“Local food production and vertical agriculture, a rapidly expanding industry across the world, have been identified as critically important to Heath Park and as a result we have just undertaken a first global pilot study. to create a model of a vertical farm entirely powered by renewable energy.

“This revolutionary process will revolutionize vertical farming methods in the future by absorbing CO2 while producing healthy food.”

Mr Lewis added: ‘Heath Park embodies the government’s goals for urban regeneration in the UK to meet the growing demand for much needed housing.

“By repurposing our existing buildings on a brownfield site, we will significantly reduce the carbon emitted if we were to demolish them, achieving another important government goal.

“We have a unique project that will massively benefit the environment.

“Inclusion in the Global Atlas of Government Investments provides us with an excellent platform to attract the international investments needed to turn this exciting vision into reality. “

“It demonstrates how the inclusion of a large-scale vertical farm goes hand in hand with real estate to create a true environment to live, work and play for the future, and which will constantly sequester carbon.

Save LV from private equity sharks: members CAN vote against deal