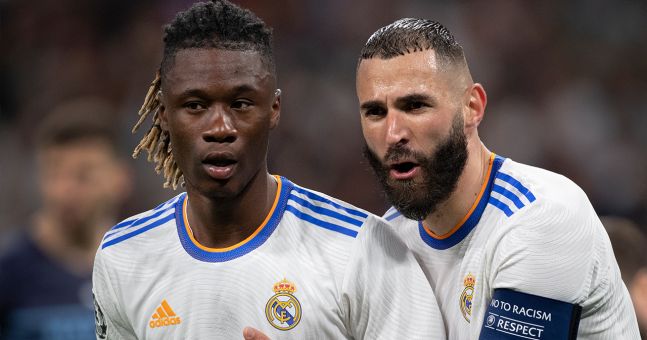 Real Madrid midfielder Eduardo Camavinga has expressed his pride in representing refugees around the world as he prepares for this weekend’s Champions League final against Liverpool.

Camavinga, who transferred to the Spanish capital from Rennes last year, was born in a refugee camp in Angola before moving to France with his family when he was two years old.

He has since represented France at senior level, becoming the youngest player to do so in over 100 years.

The 19-year-old is eager to use his platform to amplify a message of solidarity with refugees around the world and supports the UNHCR Football4Refugees call.

Camavinga’s message of solidarity for refugees

Speaking ahead of Saturday’s final in Paris, he said: “I was born in a refugee camp in Angola after my family fled the war. My parents brought me to a new life in France and football got me to the Champions League final.

“I am grateful to play and proud to do so as a former refugee. I hope the millions of refugees around the world who also love football know that we stand together.”

Camavinga made 39 appearances for Los Blancos throughout his first season and came off the bench in his spectacular late comeback against Manchester City in the semi-finals.

His mature performances in Carlo Ancelotti’s midfield saw him become a long-term successor to the aging duo of Toni Kroos and Luka Modric.

The Football4Refugees Appeal was created to unite the global football community in raising essential funds to provide humanitarian aid and protection to people forced to flee their homes by conflict, war or persecution.

It was announced during the week that the Champions League Saturday night’s ball will be auctioned off after the gamethe proceeds of which are donated to UNHCR and the UN refugee agency.