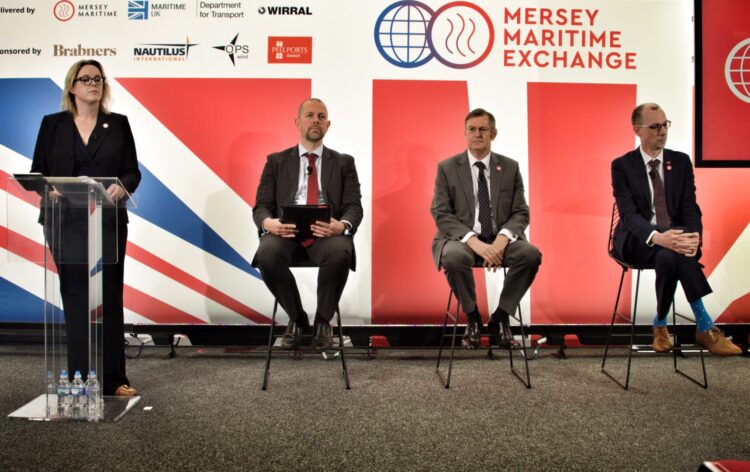 Held at Mersey Maritime headquarters and broadcast live to an online audience, the Maritime Exchange, Maritime 2050: where are we now? was organized by Mersey Maritime in partnership with the Department for Transport and Maritime UK. He debated the progress of the British government Maritime 2050 report.

The conference was sponsored by Brabners, Nautilus International, OPS Wind and Peel Ports Group. And he was backed by the Wirral Council.

There was also a strong ministerial presence at the event. Maritime Minister Robert Courts was in attendance and delivered a keynote address. He was joined by video link by Innovation Minister Amanda Solloway and International Trade Minister Graham Stuart. Former Minister of Maritime Nusrat Ghani, one of the authors of Maritime 2050, also spoke.

Tom said it was vital for UK companies to be able to secure funding to stay ahead in terms of new technology and innovation. He explained, “International competitors are getting more funding and we have to move forward. We don’t just want to be parts suppliers.

“Other industries such as the automotive industry have been working together for longer and we need to be more collaborative. We need funding to be able to implement commercial prototypes. “

Bringing in the best minds and innovators from outside the industry was also important, said Jonathan, adding, “We need to inspire people to think differently. Better productivity could have a direct impact on the bottom line and this will free up more funding.

“Over the past year, due to the pandemic, we have seen 10 years of activity in other industries squeezed into one year. How do you do that in the sea? We have to look to other industries. Things are happening at an advanced pace in the automotive and aerospace industries.

Kevin said innovation in the maritime field could be fostered by bringing in people from other digital fields, such as games. He explained, “We need to create a mindset of sharing and opening up knowledge. This is how we move forward strategically together.

“In the maritime sector, we need to have more data points and make them available free of charge. If we start to share our knowledge with each other, we will be able to see the change happen very quickly. “

Tom agreed that greater collaboration was the key to securing more government funding and support, adding, “We will only get funding if we speak with one voice.”

Peter said ship owners were ready to switch and switch their ships to more sustainable sources of propulsion, but added that a significant investment in new infrastructure would be required.

“The shipowners are ready to invest but the certainty must be there,” he said. “Are we using transitional fuels or are we going straight to technologies such as hydrogen. We need to speak very closely to the government.

Later this year, the government will release a new shipbuilding strategy, and Chris was keen to dispel the myth that military technology and the environment were incompatible.

He explained, “What struck me the most was the need to expand our horizons beyond the usual bandwidth of traditional defense providers. The challenge is how to bring innovative thinking into the design and construction of new ships. We must be a greener maritime nation and the Royal Navy must play its part. “

Nus said it was positive the UK had taken the lead over many countries around the world in producing a clean maritime plan in the wake of Maritime 2050. Che said he wanted support for small businesses to the urban area of ​​Liverpool before The government announces the next generation of offshore wind farms.

OPS sends technicians across Europe to repair and maintain offshore wind turbines and also operates a state-of-the-art training center. Che said, “We need to create a bigger training center if we are to meet the demand. “

Richard said two of the biggest issues in terms of regional growth were transport connectivity and planning rules around ports. He added: “It’s the ‘last mile’ links that count. About 75% of freight is transported by road and we need to invest in more rails so that we can move freight in a carbon-friendly way. “

Stephen also said that it is the small investments in transportation “pinch points” that matter more than the larger investments in infrastructure. He explained, “As ports, we are in the middle of the freight journey.

“We can boost investment and jobs, but it’s not good if we can’t move the freight. It is currently faster to move things by rail from north to south than from east to west and this is where we need more support.

Vicky agreed, adding, “It’s about bringing industry and government together. The “last mile” has been a problem in the transportation industry for 20 years.

Earlier this year, the government announced that the Liverpool city region would be part of the new generation of UK free ports. It will cover several locations in the region, but critics say it’s just one way to help businesses avoid taxes.

However, Stephen said it was a very narrow way of looking at Freeports and said he thinks the benefits are much broader. He said: “People are aware that we have developed Liverpool2 at the port of Liverpool, but we have also talked about the broader concept of ‘superport’.

“Freeports bring this superport idea to life. It is simply a matter of tax and customs advantages, but it is also a question of crystallizing and energizing this cluster effect. It starts to take over and you start to create specialties, and then your economy really starts to spin.

“Ports such as Liverpool can provide an incentive to invest in an area. We have invested half a billion pounds in Seaforth. We have seen how this attracts other investors. Investment follows investment and growth follows growth.

Sarah Kenny returned for the chair of this latest panel which included International Trade Minister Graham Stuart, Roy Barry, partner and head of manufacturing and supply chain at the law firm Brabners and Clive Hickman, Managing Director of the Manufacturing Technology Center (MTC).

Speaking via video link, the minister said the past 18 months have taught the UK the importance of building resilience. He said the new Free Trade Agreement (FTA) with Australia was good news and that it was “just the start”. He added: “We will sign more agreements and ensure access to larger export markets. “

Roy said we must be prepared to “look west” before a likely FTA with the United States. He said free ports were a well-known concept in the United States and that it was good news in terms of the UK’s trade relationship with North America. He added: “FTAs are fundamental to our future as a trading nation. “

Training is a critical issue in terms of competitiveness according to Clive. He explained, “Too often we train people just to use today’s technology, but we also have to give young people the skills they will need in advanced manufacturing in the future.

“When we bring advanced manufacturing into a business, we make sure it introduces a development program for existing staff. We can retrain people into more valuable jobs. In the 10 years that MTC introduced new technology to businesses, this has never resulted in the loss of a single employee.

Clive also returned to a theme discussed in one of the previous sessions on the need for great collaboration within the maritime sector. He said: It’s a classic British trait to always think your main competitor is next door and not halfway around the world.

“Other sectors, such as aerospace, have shown that by working together you can mobilize more investment. Maritime needs to get that steering wheel moving. It’s the collaboration that will make us great.