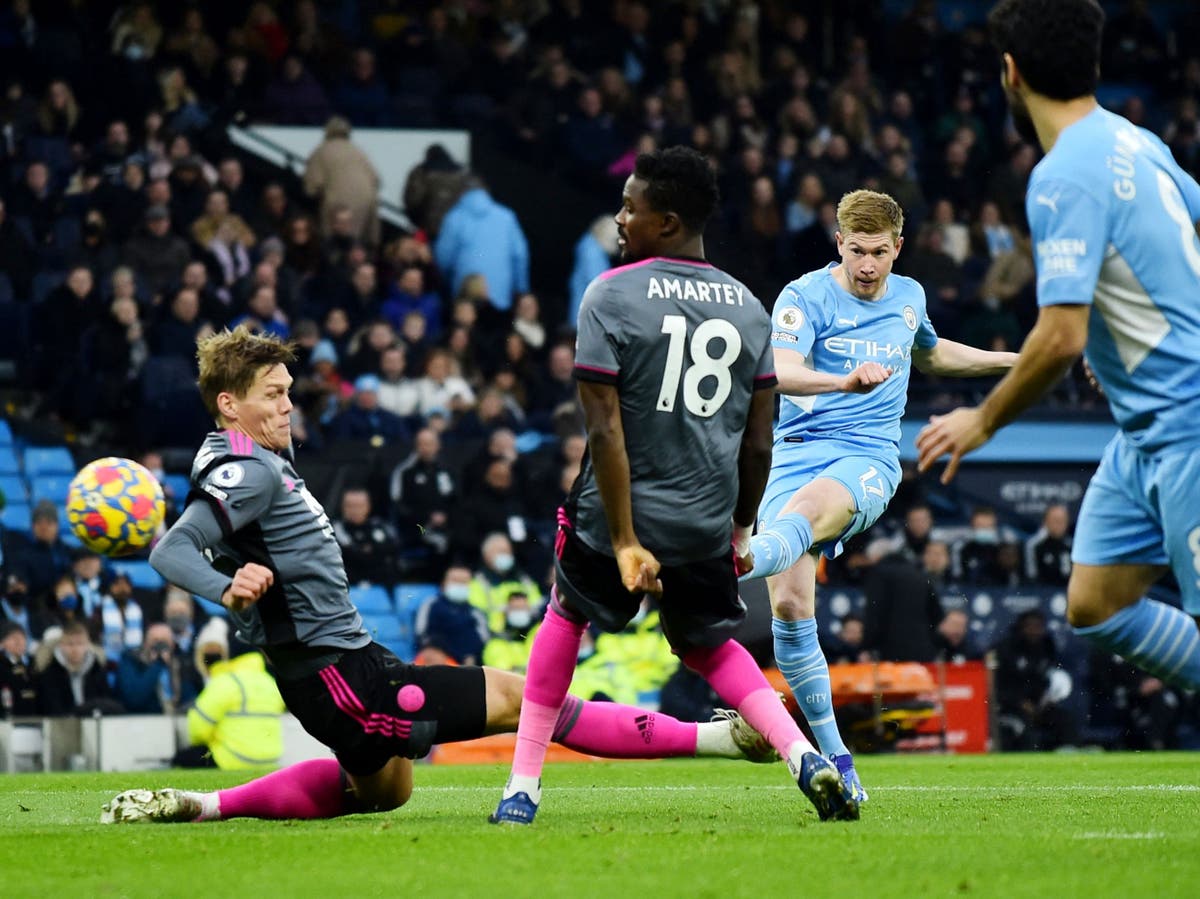 Guardiola: “Man City cannot attack faster, we are not Liverpool”

With Covid hitting the schedule hard, Brendan Rodgers’ side face an uphill battle to stop the defending champions.

With Pep Guardiola’s side in great shape and with the potential to advance six points to the top of the table, the Foxes will need to show immense character after a landslide loss to Liverpool in the Carabao Cup. . Leicester are ninth in the table and can close the gap on those who pass them in European places, with Tottenham seventh just four points clear.

City can claim eight straight domestic wins today as Liverpool and Chelsea struggle to keep pace, with Bernardo Silva in scintillating form after inspiring another dominant victory last time out against Newcastle. Guardiola also urged fans to continue to do their part to make sure matches don’t come back behind closed doors, while helping to ensure society is as safe as possible: “I want to trust people who know and they say it’s the safest way – to take a vaccine. People don’t die when they get vaccinated. Wearing a mask is so important, like social distancing and hand sanitizers, so let’s try to do it. Otherwise, he can (come back) over and over and over again.

Follow live updates from the Etihad Stadium with goal and score updates, reactions and analysis of what promises to be an entertaining game:

Arsenal took the lead against Norwich with Bukayo Saka meeting a Martin Odegaard cross and finding the back of the net. The Gunners started well with Gabriel Martinelli and Alexandre Lacazette who combined well in the preparation.

5 minutes: it didn’t take long! Fernandinho lifts the ball over Leicester’s defense as De Bruyne runs deep into the box. He controls the ball and walks away from a tackle. Bernardo Silva runs to the right side of the box to offer an option and drives the center-back away. De Bruyne moves to the left, turns towards the goal and places a left foot effort in the lower corner!

3 minutes: Close! Manchester City got off to a quick start here. Short, sharp passes in the box saw Riyad Mahrez prepare a shot that was blocked. Kevin De Bruyne recovered the rebound and slipped Bernardo Sikva into the right side of the box. He shifts before returning the ball to De Bruyne who has his own shot blocked by Kiernan Dewsbury-Hall.

Kick-off: City start the game with a pass to their baseline. Aymeric Laporte sends an early ball to the left side of the pitch as Raheem Sterling drifts off the wing. He controls the ball in the box and places it in the center where Jannik Vestegaard clears for Leicester.

Man City vs Leicester: here are the teams

Kasper Schmeichel leads Leicester City to the Etihad Stadium. Manchester City will gain six points clear at the top of the Premier League table if they win today.

The home team follows the Foxes to applause from home fans. It should be an intriguing game, City will be favorites, but if James Maddison plays well, Leicester will be threatening.

For a weekend with the least amount of football played to date, this could turn out to be the most significant time of the season. It’s certainly hard not to think that this could be decisive in the title race, when three probably turned into two, and one clear.

Chelsea lost a six-point lead because they didn’t have a big enough squad to face so many first-team players. Liverpool lacked most of their midfielder as well as star defender Virgil van Dijk and so could only draw against a Tottenham Hotspur who often overwhelmed them. Much of their 2-2 draw involved a lot of debate as to whether Spurs’ own Covid-imposed break actually benefited them.

Then there was Manchester City, the richest club in the country. Their seemingly interchangeable starting squad passed Newcastle United, to score a three-point lead at the top.

Man City vs Leicester: Sterling back in goal

After a slow start to the season that has seen him fall off the bench on several occasions, Raheem Sterling can score in four consecutive Premier League games for the first time since September 201 if he finds the back of the net against Leicester today hui.

James Maddison has been directly involved in six goals in his last four Premier League games (three goals, three assists), the same tally as in his previous 26 appearances.

Brendan Rodgers may become the second manager to win a top-level game against a Pep Guardiola side in consecutive seasons, emulating Ole Gunnar Solskjaer for Manchester United in 2019-20 and 2020-21.

Man City vs Leicester: Premier League push back any chance of improvement amid chaos of Covid Christmas cancellations

Rafa Benitez has the gift of synthesizing complex situations in a single eloquent sentence. He was there again this week talking about the chaos of matches linked to Covid and the pressure on the players. “The money runs the game,” said the Everton manager. “It’s quite complicated to find the right solution.

The solutions are relatively easy. The complication is the cost.

Man City vs Leicester: does Mahrez bode well for City?

Man City are undefeated in eight home league games on Boxing Day, winning each of the last six games in a row. Their last such loss dates back to 1996-97 against Port Vale in the second division.

However, Riyad Mahrez has been on the losing side in his five Premier League appearances on Boxing Day – the worst record in the history of the competition.

Who was Janice Long and what illness did she suffer from?