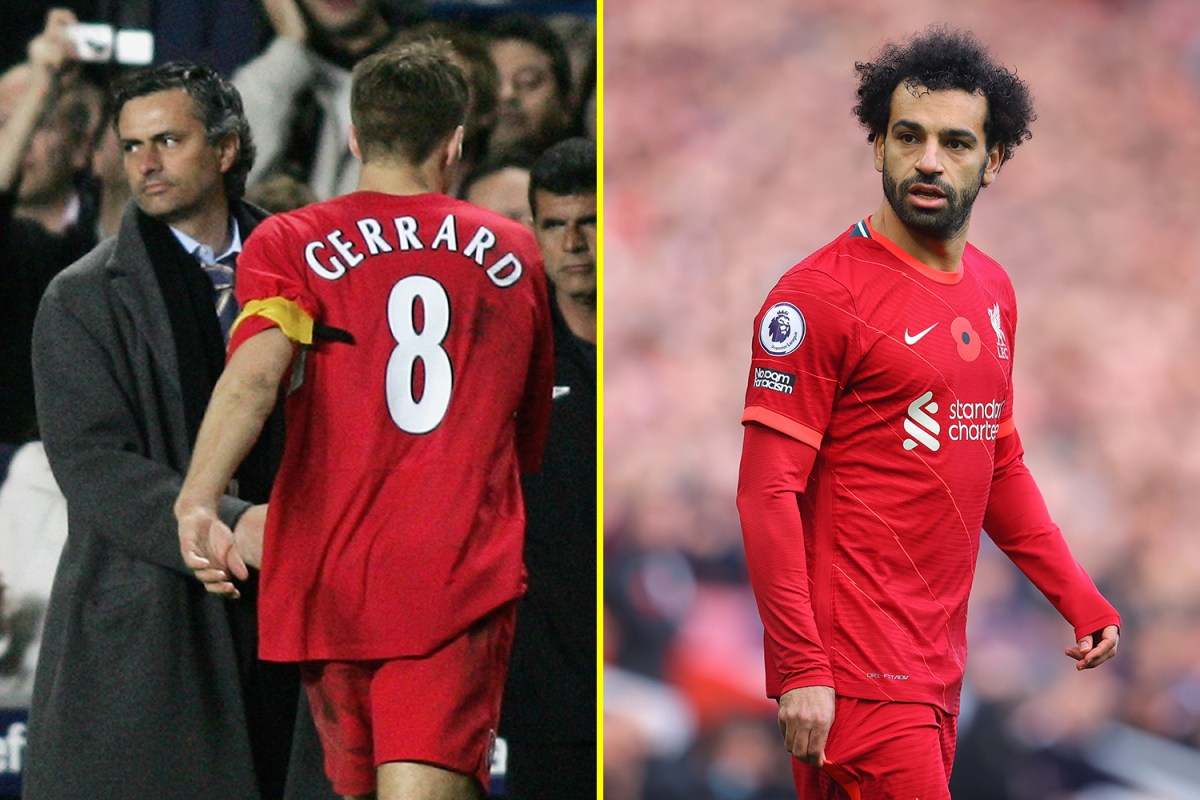 Liverpool nearly lost Steven Gerrard to Chelsea and could be on the verge of making the same mistake with Mohamed Salah who could feel left ‘unwanted’ and ‘overlooked’ as contract talks drag on.

The man who most considers the club’s greatest player, Gerrard, was nearly snapped up by Roman Abramovich’s Chelsea in 2005 as the Reds took their time on a new contract.

Liverpool managed to hold on in the final hours as Gerrard slipped away, but the club appear to have failed to learn their lesson with current superstar Salah.

Described by some as the best player in the world in his current form, Salah has been above other Premier League strikers this season with 16 goals and nine assists in 20 games.

Goal of the Season contenders against Manchester City and Watford have left fans in disbelief at the Egyptian’s talent as he continues to set the standards since signing in 2017.

It had been non-stop good news in regards to Salah’s love affair with Liverpool, but things have taken a turn as talks with owners FSG over a contract extension drag on.

Salah’s current deal at Anfield expires in the summer of 2023, and he was expected to sign a new deal towards the end of last campaign.

However, no announcements have been made in 2021, and Salah has started using names like Barcelona and Real Madrid to force Liverpool’s hand, as he is now drawn to plea.

Clearly desperate to continue at the club that took him to the top of the game, Salah has made repeated public statements to that effect, saying a deal is in Liverpool’s hands.

Manager Jurgen Klopp has had to calm the fans down on more than one occasion, but those with long memories may feel restless after past events.

In his autobiography ‘My Story’, Gerrard recalled: “When I was interviewed shortly after lifting the monster trophy into Turkish skies, I made it clear that I intended to stay at Liverpool.

“I’m sure the manager and Rick Parry will want to sit down very soon and a decision will be made,” I said before giving in to jubilation. “But how can I leave after a night like this?” I wanted to stay. But I heard nothing during the whole month of June and the first days of July.

“It gave Chelsea, and Jose Mourinho in particular, a chance to really get into my head. I still don’t know, all these years later, why there was no approach from Liverpool to me.

Despite the new owner, Salah also expressed his unhappiness with his current contract situation, and Gerrard revealed what feeling unwanted can do to a player.

“We reached the final in Istanbul, and the club knew I was ready to commit to a new contract,” Gerrard wrote.

“I expected Liverpool to sign me, especially since they had already spoken to Igor Biscan and Didi Hamann about their new contracts.

“Looking back, it looks like they could have issued a contract offer in the week before Istanbul. Even sooner wouldn’t it have been the perfect time to give your young captain a boost before the bigger game of his life? Sign him up and protect him.

“There was negligence in my situation in 2005. I don’t know who was to blame, but should they have offered me a contract after the Champions League final? Yes. I think so.

“I still think they should have come to me next week and said, ‘Let’s fix this. It would have killed all the speculation and saved everyone a lot of heartache.

A Premier League and Champions League winner with Liverpool, Salah recently said he was “not asking crazy things” of the club, which sounds suspiciously like Gerrard’s situation.

“I was also confused because I wasn’t asking for anything out of the ordinary in terms of the bloated economy of football,” the current Aston Villa boss wrote. “I was asking for the going rate paid to a top midfielder in Europe. Chelsea offered more money, but it didn’t matter.

Gerrard eventually stayed at Liverpool as he was “close to signing for Chelsea” for £32m and spent his entire European career with the club between 1998 and 2015 before signing for LA Galaxy.

The English great has spoken candidly about the effect feeling unwanted can have on a player’s decision-making, and it’s hard to feel that Salah isn’t currently under the same stress.

“I didn’t want any abuse. I actually just wanted to play football, ideally for Liverpool, and try to win a few more trophies,” Gerrard revealed.

“I still understood what it felt like to be flattered and chased away. Mourinho, whom I admired so much as a manager, had also spoken about trying to sign me for Inter Milan in the season they won the Champions League.

Salah will likely feel some, if not all, of these emotions as he continues to pressure the owners of Liverpool into a deal.

If a top club like Paris Saint-Germain or Real Madrid were to spring up suddenly, things could change quickly and the Reds won’t have learned from their mistake.

Betting offer of the day

TOS: New customers only. Minimum deposit of £10 • A qualifying bet is a “real money” wager of at least £10 • Minimum odds of 1/2 (1.5) • Free bets are credited upon settlement of the qualifying bet and expire after 7 days • Free bet stakes are not included in returns • Casino bonus must be claimed within 7 days • To withdraw bonus/associated winnings, wager x40 bonus amount within 14 days • Casino bonus expires after 60 days • Withdrawal restrictions and full terms and conditions apply 18+ begambleaware.org