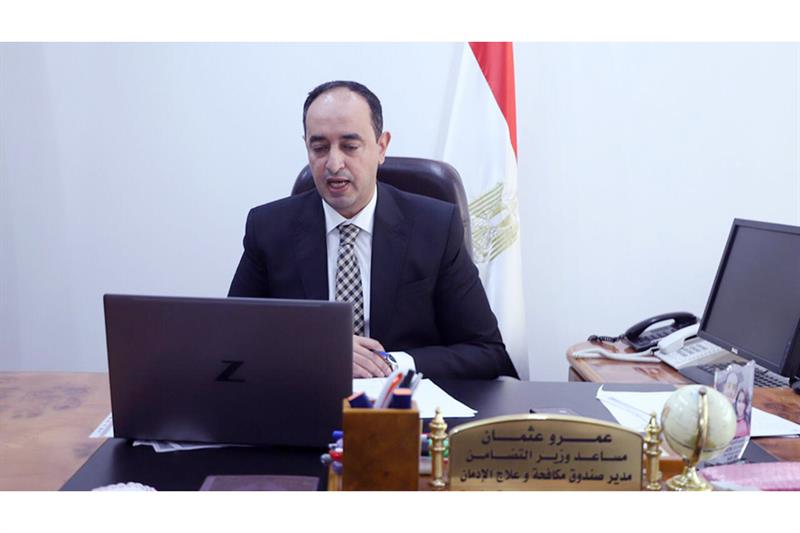 FDCTA participates in Libya’s first international conference on the impact of drugs and psychotropic drugs on family and society. Egypt is showcasing its experience in drug demand reduction amid international praise from country and UN representatives at the conference. Technical support to Libya to benefit from the progress of the FDCTA to protect young people against drug addiction.

The Drug Control and Addiction Treatment Fund (FDCTA), led by Social Solidarity Minister Nevine Al-Qabaj, participated online in Libya’s first international conference on the impact of drugs and psychotropic drugs on family and society, titled “Dealing with Drugs is a Collective Responsibility.” The FDCTA was invited by Libya

government to attend the conference, which was attended by Deputy Prime Minister and Minister of the Interior of the Government of National Unity Khaled Al-Tijani, as well as representatives of several Arab countries and the director of the Office of United Nations on Drugs and Crime (UNODC) in Libya.

Egyptian Deputy Minister in the Ministry of Social Solidarity, Amr Osman, who is also director of FDCTA, delivered the inaugural address at the opening session.

Osman said he was honored to have been chosen as a member of the conference’s international advisory committee and said that the immense scientific work that has gone into preparing for this conference is rooted in a strong sense of responsibility and unlimited innovation.

Osman warned of the serious threat of drug abuse, which makes it a critical issue for the national security of any country. He said it is as important as the scourge of terrorism, noting that the attention every government gives to this issue makes this conference an important step in realizing a scientific vision to combat drug abuse. based on a sober methodological approach based on field studies, information, statistics and surveys. It also designs comprehensive interventions to combat drug abuse.

Organizers have scheduled a panel discussion on the work of the FDCTA to reduce the demand for drugs and how to support Libyans in this endeavor.

Osman conveyed greetings from Qabaj and said that combating drug addiction is a top priority for development work in our modern world. The World Drug Report 2020 found that drug abuse in the 15-64 age group accounts for 5.3% of the world’s population. Furthermore, that drug addiction has increased more rapidly in developing countries than in developed countries

countries. Unfortunately, there are no exact figures for Arab countries.

Nevertheless, there is a consensus that it

is drug abuse in the Arab world and rates are increasing exponentially.

Global Drug Abuse Reports also make it clear that we need to work hard to address the damage of drug abuse in terms of health, development,

world peace and security. Globally, drugs are responsible for at least 190,000 premature deaths, most of them preventable, most often due to opioid use.

Osman presented the work of the FDCTA, including policies, legislation, prevention programs, early detection campaigns, as well as the support and provision of treatment, rehabilitation and reintegration.

services. Also including education on drug addiction in school curricula, treatment of drug addiction patients in specialized hospitals partners of Hotline 16023, on the basis of international standards and provided free of charge and in the strictest confidence.

So far, there are 28 centers in 17 governorates, up from 12 and seven, respectively, in 2014. Osman continued that drug treatment

centers will open in all governorates of Egypt by 2025.

The reintegration of recovered drug addicts is carried out by providing them with loans to start up small businesses as part of the FDCTA’s “new start”.

initiative in partnership with Banque Sociale Nasser. There are also serious testing campaigns with school bus drivers, which drastically reduced their number of drivers from 12 percent in 2017 to 1.2 percent. Random tests are also carried out for government employees, who receive free and confidential treatment if they voluntarily request treatment.

Drug abuse among government employees has fallen from 8% at the start of the campaign in March 2019 to 1.6% today. Libyan Tijani and the UNODC representative praised the FDCTA’s efforts, while Osman gave an overview of several anti-drug programs and activities. These include correcting misleading information about drugs among young people and other categories most likely to use drugs, and advertising campaigns using influencers such as “You Are Stronger Than Drugs” with Mo Salah, the striker of the Egyptian national team who also plays for Liverpool. A more recent campaign began during Ramadan and increased the volume of calls to the drug abuse helpline by 400%. Awareness campaigns are also carried out in schools and universities.

Conference participants praised all these efforts and pledged technical support to Libya to emulate the FDCTA’s experience in reducing drug demand and protecting youth from drug addiction.

* A version of this article is published in the November 25, 2021 edition of Al-Ahram Weekly

The 25 highest paid athletes of all time