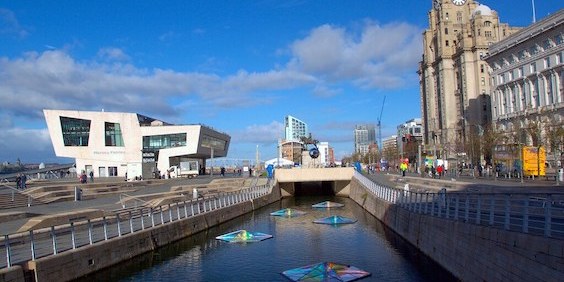 Architects David Adjaye, Mariam Kamara and Asif Khan and artist Theaster Gates were selected to redesign Liverpoool’s historic waterfront canning dock, winning a competition to transform the area hosted by the National Museums of Liverpool. The four were unanimously nominated by a jury of local officials and industry experts to accomplish the task, whose purpose is to shed light on the history of the transatlantic slave trade. Liverpool in the 18th century was a hub for the slave trade, its economy benefiting greatly from the work done at the canning docks, where slave ships frequently docked for repairs.

The team is to redevelop the area between the town’s Royal Albert Dock and Mann Island, and redesign all waterfront facilities. The plan also includes a public art initiative. Among the planned changes are a bridge connecting the pumping station to the main island and the setting up of cultural and educational experiences at the two dry docks. The museum’s more than 160-year-old Dr. Martin Luther King Jr. building will receive a new entrance, with improved accessibility and orientation throughout the region.

The redesign is part of a larger redevelopment of the area, which is expected to take a decade. The controversial overhaul saw Liverpool stripped of its Unesco World Heritage status last summer. The Unseco authorities condemned the redevelopment as almost certainly leading to an “irreversible loss of attributes conveying the outstanding universal value” of the historic dock area. Liverpool Mayor Joanne Anderson called the move “incomprehensible”. While not aimed at controversy, Khan’s recent statement regarding the project could perhaps be considered by all parties seeking perspective. “History is like the ocean, with all of its depths and betrayal,” Khan noted. “History can wash things away one day and bring them back like ghost ships the next.”