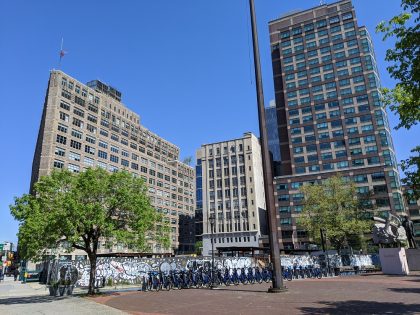 In the news: a vision for Canal and Varick

A VISION FOR CANAL AND VARICK
YIMBY has renderings of 2 Hudson Square, the vacant lot at the Canal between Varick and Sixth Avenue being designed by SHoP Architects.

LENDER TO SEIZE ON HOTEL ANDAZ
Crain’s reports that the lenders behind the Andaz Hotel at 75 Wall “are preparing to seize the building on a $ 55 million loan that has not been repaid by its current owner, the Hakimian organization.” The property was remodeled by Hakimian [in 2006-2009] and is now comprised of two parts: a 253-room hotel currently operated by Hyatt and 346 residential condominiums. After months of default, the lender, Annaly Commercial Real Estate Group, wants to take possession of the hotel portion of the building, according to a lawsuit filed Wednesday in Manhattan Supreme Court. The hotel is currently closed.

YURMANS IN THEIR ELEMENTS
City Country has an article about Tribeca residents David and Sybil Yurman, who just released a new collection called Elements. “Containment has been a prolific time for creators Sybil and David Yurman. Partners in life and business, the 52-year-married jewelry designer couple have moved into their Tribeca loft with neighboring design studios for him and her, and between cooking, painting and listening to Miles Davis, they created Elements, a deeply personal collection that they unveiled today.

BRADY LIBRARY OWNER WANTS TO RETURN HIS GUN
The Brandy Library co-owner is suing the NYPD for refusing to collect his firearms license, The post reports. Leifer said he needed the harder-to-obtain “transport” permit because he does business and takes on client assignments that sometimes involve a “substantial amount of money.” He is also a partner of two. bars – Brandy Library in Tribeca and Copper & Oak on the Lower East Side – which “also generate cash”.

What every retirement saver needs to know about 2022