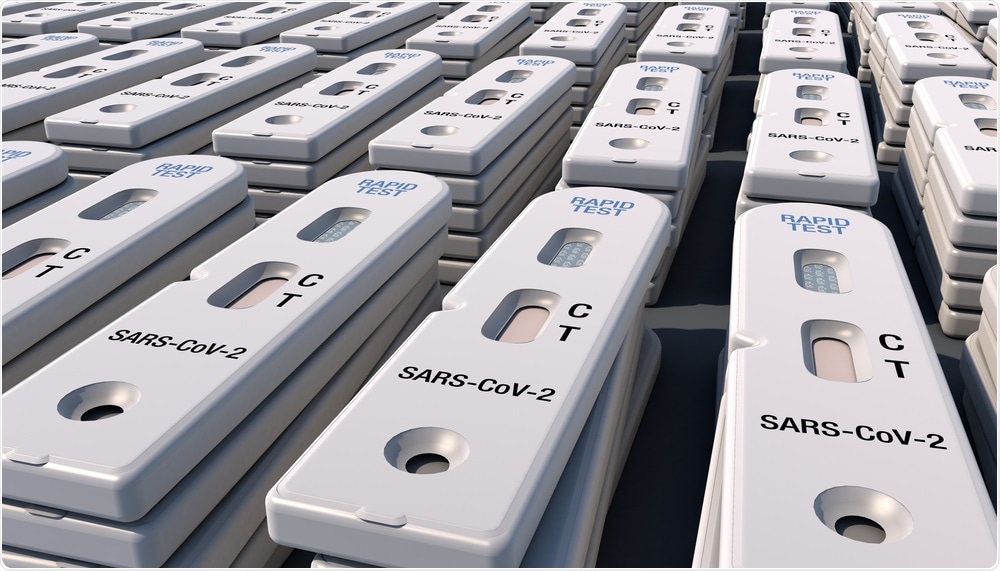 
The 2019 global coronavirus pandemic (COVID-19) has had a dramatic effect on society, with government public health advisories encouraging adults to work from home and schools switching to e-learning platforms to teach their students. As the lockdown has eased in many countries around the world, schools and workplaces have also returned to their normal form.

Many workplaces look different now compared to before the lockdowns began due to the presence of masks and stringent testing requirements for Severe Acute Respiratory Syndrome Coronavirus 2 (SARS-CoV-2). Much of the testing performed in these settings includes lateral flow testing which is followed by a reverse transcriptase polymerase chain reaction (RT-PCR) RT-PCR test, if necessary.

The massive use of rapid lateral flow tests, which has been supported by the World Health Organization (WHO), has allowed a semblance of normalcy at work and school. The advantages of using lateral flow devices (LFDs) include their low costs and ease of use.

Across the UK, LFDs have been in use by schools since March 2021. These schools often use these devices to test pupils twice a week with the aim of preventing the spread of infection in the event that one or more pupils would be positive for SARS. CoV-2.

Despite their usefulness, there has been considerable controversy around the use of LFDs, as some students have reported that applying soft drinks instead of their own sample can result in a positive test. To this end, a group of collaborating researchers from Liverpool systematically tested a variety of different soft drinks to determine their ability to create false positive results.

LFDs are designed as cartridges comprising a nitrocellulose membrane strip and absorbent paper containing dried test reagents. When these reagents are mixed with the analyte from a test sample, they migrate through the nitrocellulose strip and onto the test line where the SARS-CoV-2 monoclonal antibody is bound.

Two lines can be produced in a lateral flow test. One line is the control line that confirms that the test is working properly and its validity, while the other line is produced if the sample is positive for SARS-CoV-2.

The Innova SARS-CoV-2 Rapid Qualitative Antigen Test was one of the first devices to complete the multi-step assessment process. As a result, this test has been used in pilot tests in the communities of Liverpool.

LFDs have been used for large-scale community open-access testing because of their ability to accurately distinguish individuals who have a higher viral load of SARS-CoV-2. While RT-PCR assays are more susceptible to the virus than lateral flow assays, the widespread availability of LFDs is generally much better than that of RT-PCR assays.

Additionally, LFDs only require about 30 minutes to deliver test results, which is comparable to the 48 hours it takes to get RT-PCR results. This is an important benefit, as it can allow people who test positive to stay in their homes to isolate and prevent the spread of the infectious virus while they follow up with an RT-PCR test.

With schools reopening on March 8, 2021, LFDs were introduced for rapid asymptomatic testing in high schools to allow students and staff to be tested for SARS-CoV-2 twice a week. Those who had tested positive through these tests were isolated, as well as those who had been in close contact with them. A subsequent RT-PCR test should be booked for these individuals within 48 hours of receiving the positive result.

However, after three months of regular testing, a school in Merseyside reported students who found that drinking fruit-flavored juices or misusing them as an analyte could potentially give a false positive result. To that end, Liverpool-based researchers undertook a study to assess a variety of soft drinks and determine their ability to be misused as an analyte and provide a false positive result for SARS-CoV-2.

The team had investigated 14 common brands of soft drinks, including:

The 14 soft drinks that were included in this study in the original packaging (a) and sterile universal containers (b).

Each of the drink samples was left to stand for two hours prior to analysis to allow them to reach room temperature. One milliliter (ml) of each sample was then drawn into the extractor tube of the Innova kit. The amount of sugar and the ingredients of each sample were also noted. Acidity was also tested using a urine test strip which included pH quantification.

In addition to these drinks, four sweeteners were also tested, including Splenda, Canderel, Sweetex and Hubbard’s Foodstore. To prepare the sweeteners, the researchers dissolved a sweetener tablet in 20 ml of spring water, of which 1 ml was used for the actual tests.

The SARS-CoV-2 lateral flow device results after administration of the 14 soft drink samples.

Mixed results were reported in this study, with spring water having a markedly negative result, 3 of 14 beverage samples yielding zero LFD results that primarily included fruit concentrate drinks, and 10 out of 14 drinks yielding zero LFD results. a positive test result. The researchers found that the drink samples that produced false positive test results were all similar in their sugar and pH levels. Additionally, all four sweeteners included in this study resulted in negative LFD tests.

The researchers concluded that according to the user guide provided, food and drink should not be consumed 30 minutes before the test. They recommended that the test be done in the morning and under possible supervision.

The actual mechanism of the false positives identified in this study remains unclear and will therefore require further research and analysis, as the acidity and sugar content of the drinks do not appear to have an effect on the results. The researchers suggest that future studies evaluate the preservatives present in these drinks to determine their role in contributing to the appearance of these false positives.

medrxiv publishes preliminary scientific reports that are not peer reviewed and, therefore, should not be considered conclusive, guide clinical practice / health-related behavior, or treated as established information.