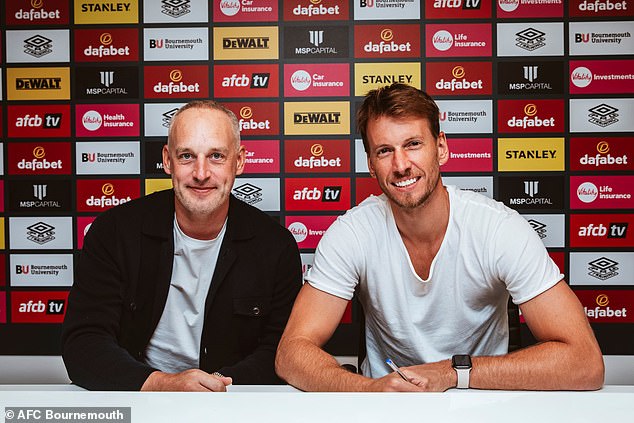 Bournemouth announce the signing of former Barcelona goalkeeper Neto on a free transfer as Scott Parker’s pleas are FINALLY answered… with Feyenoord defender Marcos Senesi set to follow the Brazilian in a £12.6million deal pound sterling

By Simon Jones and Lewis Browning for Mailonline

Bournemouth have announced the signing of goalkeeper Neto on a free transfer after leaving Barcelona.

The 33-year-old watched their 2-0 win over Aston Villa from the stands at Vitality Stadium on Saturday.

sports mail revealed earlier this week that the Premier club had contacted Barcelona to assess Neto’s availability, and the move is now complete.

Bournemouth have confirmed the signing of former Barcelona goalkeeper Neto

“To be able to attract a player of Neto’s caliber is very nice,” said general manager Neill Blake.

“It’s a real boost for the club and we are delighted that he has chosen to join us. He has extensive experience at the highest level of the game, so I’m sure he will be a huge asset to us.

Despite only playing 21 times for Barcelona in three years at the club, 33-year-old Neto is set to rival Mark Travers for the No.1 spot.

The Brazilian is now in contention to face defending champions Manchester City at the Etihad next weekend.

Feyenoord defender Marcos Senesi will join Bournemouth in a £12.6million deal next week

Strengthening the goalkeeping spot directly after winning promotion is a choice Parker has already opted for, having signed Alphonse Areola on loan to usurp Marek Rodak between the sticks during his last Premier League spell with Fulham.

Travers, however, is highly rated at the club and won Bournemouth’s ‘Player of the Year’ award last season, so should keep his place for now.

Talks are progressing on a fee of £12.6m plus add-ons for the 25-year-old, who is in the final year of his contract.

The defender would be a welcome addition for Cherries manager Scott Parker, who has spoken negatively about Bournemouth’s situation after a frustrating summer in the transfer market.

The Cherries have made just three signings in the transfer window so far, luring Joe Rothwell, Ryan Fredericks and Marcus Tavernier to Vitality Stadium.

They are favorites for relegation and Parker had warned fans of the team’s situation, with Rothwell and Fredericks both injured.

But Parker’s side are now moving quickly to strengthen their squad following their 2-0 opening weekend win at Aston Villa.

The Argentina international has scored three goals and registered three assists and has also captained Feyenoord on several occasions.

The 25-year-old would help flesh out a thin department within the Bournemouth squad, with Lloyd Kelly, Chris Mepham and youngster James Hill the only current centre-backs in Parker’s squad.

Jefferson Lerma played in an improvised three-man defense against Villa, and Parker was desperate for options in that area and had previously claimed Bournemouth were not ready for the start of the season.

The Cherries were previously interested in Liverpool duo Nat Phillips and Sepp van den Berg, but Senesi is the defender who will sign at Vitality Stadium.