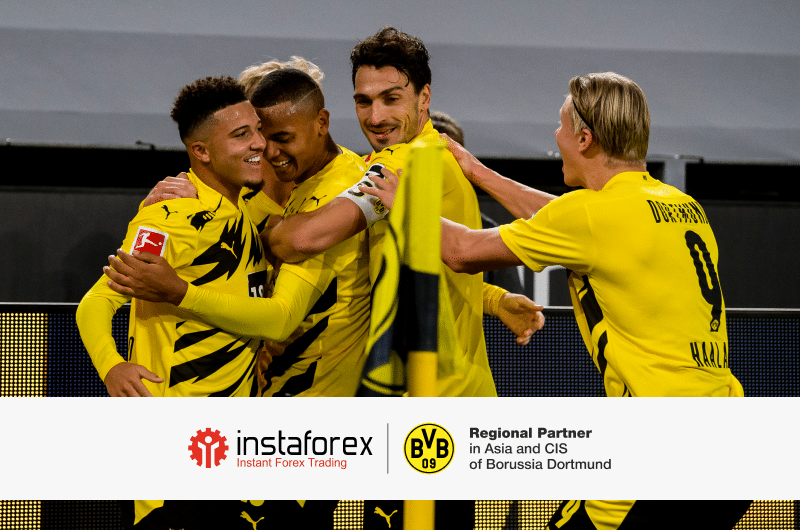 Borussia Dortmund secures their place in the Champions League!


We have just celebrated Borussia Dortmund’s victory in the Bundesliga final. At the time, the football team crushed Leipzig and lifted their fifth German cup.

We watched the game breathlessly and were probably even happier than the players themselves. As a result, Borussia Dortmund entered the top four strongest football teams and secured their place in the Champions League after 33 triumphant rounds contested.

Ildar Sharipov, Founder and Chairman of InstaForex said: “At the moment, InstaForex is not just a broker but rather an IT company, investing heavily in technology and striving to regularly offer customers new and innovative products. It is well known that IT also plays a very important role in football, so we are looking not only for a top-notch team, but also for technology enthusiasts in football, who fit our business philosophy perfectly. For these reasons, it was natural to line up with a team like Borussia Dortmund. We look forward to working with the club to further develop our respective brands in the Asian and CIS markets ”.

In the 33rd round away game three days after the Bundesliga final, Borussia Dortmund won 3-1 in Mainz. It was the team’s 19th victory this season.

The Black and Yellows amazed everyone with their spectacular teamwork and brilliant technique. During the match, Borussia Dortmund made 681 passes, shot 13 times and scored 4 goals.

In fact, the percentage of possession of the ball by Borussia Dortmund was twice that of the opponents.

In the first 45 minutes of the game, the team scored two goals. In the 23rd minute, defender Rafael Guerreiro opened the scoring for Borussia Dortmund.

In the 43rd minute, midfielder Marco Reus continued his winning streak. It looked like the outcome of the game was predetermined, but Mainz had no intention of giving up that easily.

In the second half of the game, Borussia Dortmund defended vigorously. In the 80th minute, Julian Brandt scored the third goal. Mainz opened the scoring thanks to the last minute penalty but he could not cast a shadow on the victory of the Black and Yellows.

InstaForex congratulates the team on this well-deserved victory and wishes the champions even more glorious victories! In June we will be watching club football play in the Champions League.

Borussia Dortmund will take part in the tournament for the fifth time in a row. We are sure that the team will celebrate even more remarkable achievements and look forward to unforgettable sporting events in the future.

Everything happens for a reason. Since InstaForex became a sponsor from Borussia Dortmund, the team didn’t miss a tournament and won the German Cup year after year.

Our former partner, Liverpool, won the UEFA Champions League Cup after a 4 year 2014-2018 sponsorship deal with our company. Notably, Magnus Carlsen has been at the top of the FIDE world ranking since the start of our cooperation in 2011.

Now, InstaForex is one of the leading brokers in the Forex market. The number of clients of the company exceeds 7,000,000 people worldwide and the trading volume of InstaForex is improving every day.

In this relationship, InstaForex assists a lot in providing the uninterrupted and regular work of the trading servers, which makes it possible to distribute the flow of client orders among many servers, including intermediate data centers.

An award-winning company every year since its launch, InstaForex has won awards in categories such as Best Broker in Asia, Best Broker in Eastern Europe, Best Retail Forex Broker, Best CIS Broker and many more. other.